Stay updated on all ABC events and subscribe to our newsletter:

The ABC parties are postponed till further notice :((  Ofcourse we hope to be able to do the NYE Party at Paradiso and we will keep you posted on other events..  Take care! ABC x

The 'Rock 'n Roll Sunday' at Slachthuis was supercool, thanks for showing up everyone! Follow up date: Sunday Nov. 14th. Amsterdam BeatClub at Slachthuis Haarlem!!

On 31/12 Amsterdam BeatClub will do another 'Stardust' New Year Eve Party at Paradiso Bovenzaal, ofcourse this will be g-r-e-a-t.. more info soon!!

On Sunday Oct. 10th. ABC is goin' to throw a party at Slachthuis, the hottest hotspot in Haarlem.. Check the agenda for all details!

The weekend at De Nieuwe Anita was a succes, with the Skepticals playing 3 shows for a lovely crowd! More dates soon..

The first ABC event this season at DNA will be special, with only very limited amount of visiters permitted.. so we're adding a matinee show on Sunday 19th. Read all about it in the agenda!

Yess.. we're working on the opening party for the upcoming De Nieuwe Anita season! Can't wait, check the website for all the details!

GREAT NEWS: THE FIRST PARTY IN ALMOST ONE YEAR!!!
THE '21 COMEBACK SPECIAL!
Wap Shoo Wap & Amsterdam BeatClub join forces for this 45RPM Extravaganza,
so you better all be there: June 26th. at Maloe Melo
FACEBOOK EVENT

Happy New Year, dear ABC Friends! All the best to you all, in good health. We hope to be able to wear a different kind of mask again, sometime in the near future..
much love, ABC xx

We're working on the AMSTERDAM BEATCLUB RNR XMAS SPECIAL,
it's goin' to be fun: listen to all the Xmas tunes that are not played on the radio!

We had a real wonderful night in Paradiso and would like to thank once again all the artists, the great Paradiso crew and the super crowd! Photo's will be on our website soon.. in the meantime here's the live stream for you to enjoy!

Great news: last Wednesday it was announced that the 100-person limit will no longer apply to events from July 1st. As a result, the capacity for the Amsterdam BeatClub 17th. Anniversary Party at Paradiso on Thursday July 9th. has been increased to 200 people, while of course still observing the safety measures. This means that tickets are on sale again!!! Tickets HERE

Tickets for the ABC Party in Paradiso are going fast, only 20 left, better make your reservation now: TICKETS HERE !

Only 100 tickets will be available for the exclusive Amsterdam BeatClub 17th. Anniversary Party at Paradiso on Thursday July 9th.! Presale only, no tickets at the door, tickets E22,50 each (incl membership). We'll put the ticket link on the website on Monday 08/06 at 10:00 AM.. it's first come first go, so be quick friends!

Thursday July 9th.: Amsterdam BeatClub 17th. Anniversary Party at Paradiso!
We're so happy to announce this event, it's like a new start for us..
only 100 tickets available for this nightclub in Paradiso, so be quick people!
check the agenda for all info

YESS.. we are celebrating Amsterdam BeatClub 17th. anniversary on July 9th. at Paradiso Main Hall!! It's going to be great.. more info soon!!

SATURDAY MAY 30th. - THE LAST ABC BEATCAVE LIVE STREAM !!!
This Saturday will be the 8th. edtition of the ABC live stream series and also it will be the last one for now. We had lots of fun making these streams every Saturday. It got us through some very rough times, and we do hope you enjoyed them as well. Things seem to be getting a little brighter with the new corona policies starting June 1st. Our hope is that it will be possible to organise ABC events again in the near future, one way or another. We already have some nice things planned.. definitely more news about this soon!

The first ABC live stream we did on Facebook was lots of fun and we had so much good response that we decided to make this a weekly event! Amsterdam BeatClub will be streaming a live dj-set every Saturday evening for the upcoming weeks. You can all join in with the 'ABC deejay family' Ir. Vendermeulen, Zamira à GoGo & Asnavoura l'Amour (occasionally) spinning hot 'n cool 50's/60's records from their Amsterdam BeatCave!
Just go to the Amsterdam BeatClub Facebook page to enjoy these live streams !
Showtime: Every Saturday at 20:00 - 21:00 (EU time)

CHECK THE FB EVENT ...and JUST BE THERE !

Dear ABC Friends,
Our upcoming parties are cancelled and/or postponed due to COVID-19. This will not come as a big surprise, but still we are very sorry for all people involved. We will update you when there is more news. For now we wish everyone lots of strength in these very tough times.

This Friday will be amazing.. just be there (check the AGENDA!)

Lots of good ABC events planned for this year.. Do get your name on our mailinglist & we'll keep you posted! x

The Amsterdam BeatClub "Stardust" NYE Party at Paradiso, what a wonderful night we had! Thanks so much to our fantastic MC Monsieur Petit Jerôme! Thanks Lili Liane with her Glam Glitter Corner, The Barbarellas GoGo Girls (wearing Comic Sexy dresses), also being cool stagekittens. La Sirène surprise show "Café Noir", the good rockin' CC Jerome Trio, the top notch burlesque performers La Nina & Natsumi Scarlett! The great Earl Jackson from the UK, backed by the Savoys, Monica Madgwick. We had some of Hollands coolest dj's Asnavoura l'Amour, Pallino & Miss Twist, thanks for filling that floor all night! Thanks Maz Weston & the g-r-e-a-t Paradiso Crew! And ofcourse THANK YOU, the wonderful crowd that we had.. Have a safe ride in these new roaring twenties !
photo La Sirène by Martin Pluimers, more party pics in the GALLERY !

Tickets for our ABC Stardust NYE Party at Paradiso are going fast, make sure you get your early birdies in time..!

all those great ABC parties keep coming, on Friday Nov 22nd we'll do another Tardam Records release party, this time featuring the cool 44 Shakedown,
check the agenda for all details!

Amsterdam Beat Club Helloween Bal Masqué at Paradiso was g-r-e-a-t!!
Thanks for showing up.. all dressed up.. all you ghouls!!
The pics are in the gallery !!

This NYE Amsterdam BeatClub will be back at Paradiso with a rock 'n roll extravaganza at the upper room! check the fb-event ...get your early birdies now!!

We're very happy to announce a WILD RECORDS special on Aug. 9th at Paradiso, feat. 2 WILD bands.. do check the agenda for all info!!

The Amsterdam BeatClub party last Friday at Cinetol was completely SOLD OUT!
We're sorry that we had to disappoint quite some people at the door who couldn't get in.. Here's a video (by Larissa Hoekmeijer) of the super Messer Chups-show:
"Big Noise from the Jungle", feat. ABC's Ir. Vendermeulen on barisax :)

On Friday July 5th, Amsterdam BeatClub will do their first party at Cinetol, feat. Messer Chups (Horror Surf, RU). This will be CRAZY.. get your tickets NOW!!

On Saturday April 13th. Amsterdam BeatClub goes to Venlo.. this is not an April 1st joke! :)  It'll be at the bar where Georgina Peach was discovered by the Savoys a year ago: Vader Klaassens! And it's for the VINYL-release of Georgina Peach & the Savoys fantastic album "I'm On My Way" on El Toro Records.

On March 30th we're celebrating 70 years of 45RPM records with an all-dj night.. be there!!

On Feb 23rd we'll have perhaps the youngest dj we've had for all these years: the very talented Peggy Lee (only 17!). She's also bringing her dad Richard, who'll be playing drums with the fab rockabilly band Mischief! :)

sad news: the final Amsterdam BeatClub party at Pacific Parc will be held on Friday Jan. 25th, during the very last weekend before they shut down, rebuild and become just another regular place.  We'd like to thank everyone that have been involved with this world-famous venue for all these years! And do come over to this final party, feat. Georgina Peach & the Savoys. They'll be releasing the brand new album "I'm On My Way" (El Toro Records)

First ABC party of 2019 will feature the fab Ragtime Wranglers and they're bringing the lovely Miss Mary Ann, so come all over on Januari 18th at De Nieuwe Anita!

On Dec. 22nd we'll have an all-star band "THE MINGS for you at De Nieuwe Anita,
feat. Dead Elvis & mr. Bald Diddley!

Amsterdam BeatClub will celebrate NYE at Pacific Parc this year!!!

It has been a great late night burlesque weekend at Paleis van de Weemoed, watch the pictures made by Martin Pluimers at our picture Gallery !

OUT NOW - AMSTERDAM BEATCLUB - THE BEST PLACE TO GO! GO! 2

An outstanding 2 record-set presenting the very best bands and artists that performed at Amsterdam BeatClub over the last 15 years!
You'll find the best in Garage, Rock'n'roll, Surf, Beat etc. to be combined on one record!
Included is a wicked 16 page book full of photos, rare flyers, full length stories and inside information about 15 years of Amsterdam BeatClub, "The Best Place To Go-Go"!!

Were proud to announce the celebrationof  15 years of AMSTERDAM BEATCLUB & 50 years of -PARADISO! Saturday 5th May

Get your tickets here: TICKETMASTER

Jur's Birthday Bash has been a great event... we wish him and Maloe Melo much fun years and parties to come !!

Releasedate: May 5th. at ABC Route '68 Festival in Paradiso!

Visit our Agenda for all info about this great event !

The party-pics are uploaded, see them on our GALLERY page.

Many thanks to all the fantastic artists, deejays, performers, backstage runners, Paradiso crew and the smashing crowd..

AMSTERDAM BEATCLUB  will throw a new series of parties at a wonderful location:

more on this event soon..!

Amsterdam BeatClub is very happy to announce an new series of ABC-events  at the great Graceland BBQ!

On the premiere night we'll have the outstanding Wise Guyz (Top Notch Rockabilly from Ukraine!)  and "Mr. ABC" Ir. Vendermeulen & dj-friend behind the decks! Party starts 22:00 with dj's & a Gel R&R dancelesson and The Wise Guyz start 'round 23:00, so be there in time!

more info on this site soon!

All EARLY BIRD TICKETS for this superb NYE event are SOLD OUT!! 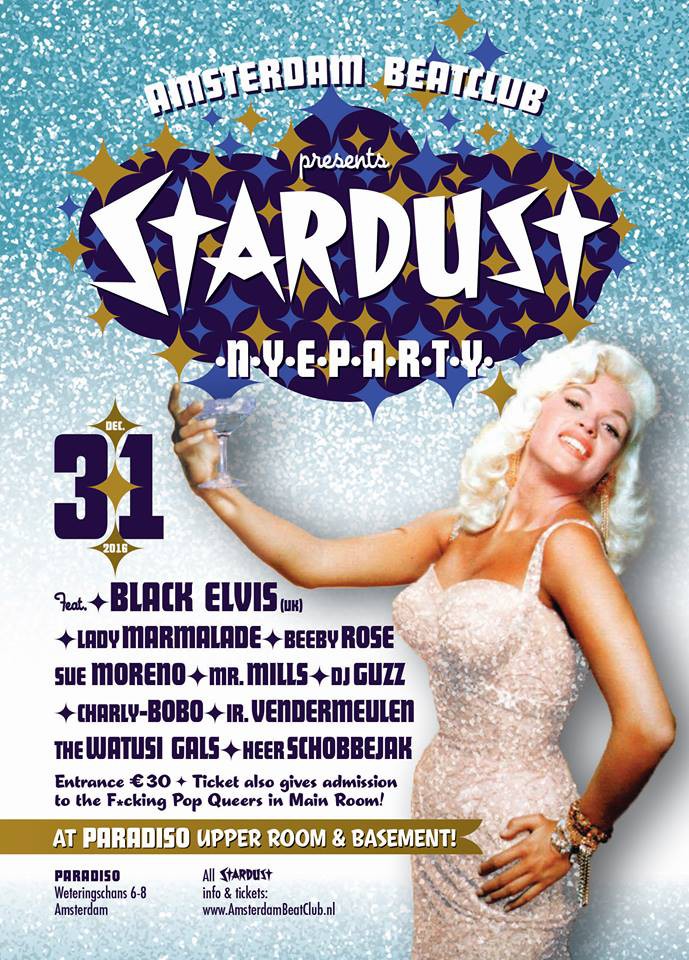 We're proud to introduce to you our new poster/flyer designer:

Check out this ultracool first flyer that he made for Amsterdam BeatClub..

this is Yves' site! 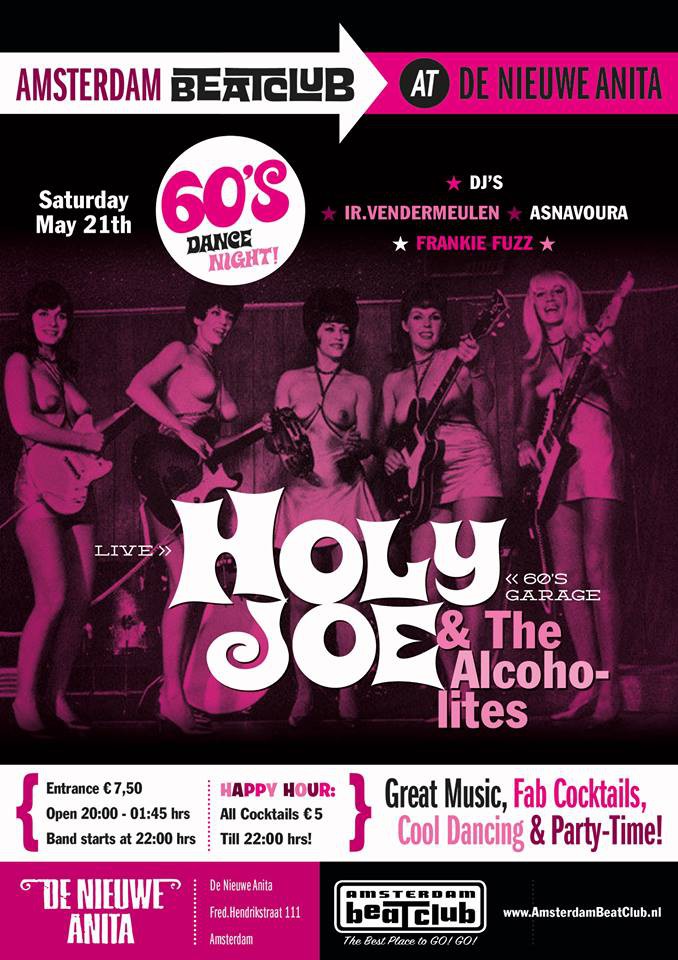 What a beautiful festival is was: 4 cool bands, each playing 4 short sets, music like in a pinball machine.. Fashion show by Comic Sexy, Burlesque, great dj's..

Thanks a zillion to:

..and ofcourse the great crowd! 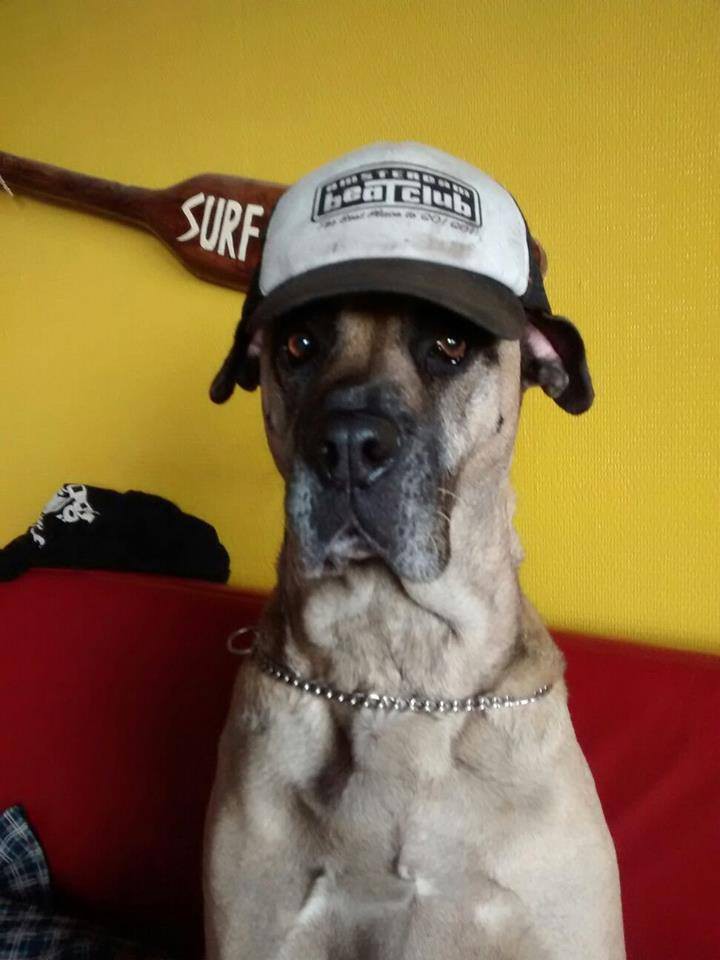 This week we've included the Official Amsterdam BeatClub Merchandise-page, where you can order your ABC goodies online!

We're proud to add to the party of April 23rd. at De Nieuwe Anita:

Opening exposition of artwork by the great Frits Jonker!

Something we're really looking forward too..

We got the whole program for the Amsterdam BeatClub Bevrijdingsfeest at Paradiso Grote Zaal, 05-05-2016!

Check the agenda for all details! 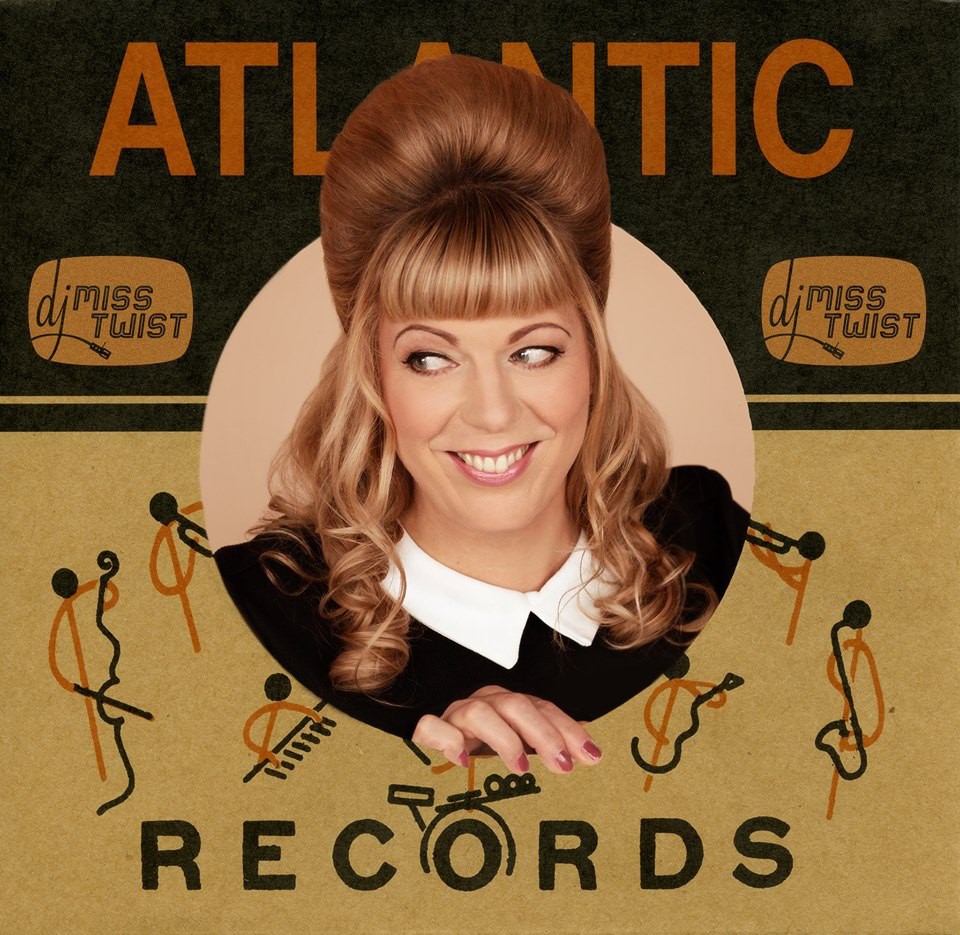 Added to the dj line-up for the "Real Gone Dance Party" at De Nieuwe Anita (April 23rd.) is the lovely deejay Miss Twist with her ultracool 45's!

Live on stage we'll have Annita & the Starbombers (Rockabilly, Country Boogie & Western Swing), so this will be a great party to look forward to..

May 21st we'll have another fine party at De Nieuwe Anita, a 60's Dance Night!
Holy Joe & The Alcoholites will play their wild 60's Garage & their crazy guitar player Frankie Fuzz will even be behind the decks for a while, to heat things up!
More news soon.

We are very happy to bring you our completely new Amsterdam BeatClub-website, with lot's of news, music, photos, flyers, videos, etccc....